Dubai Department of Tourism and Commerce Marketing and Destinia.com reap benefits of alliance to make the city the ultimate destination for global tourists 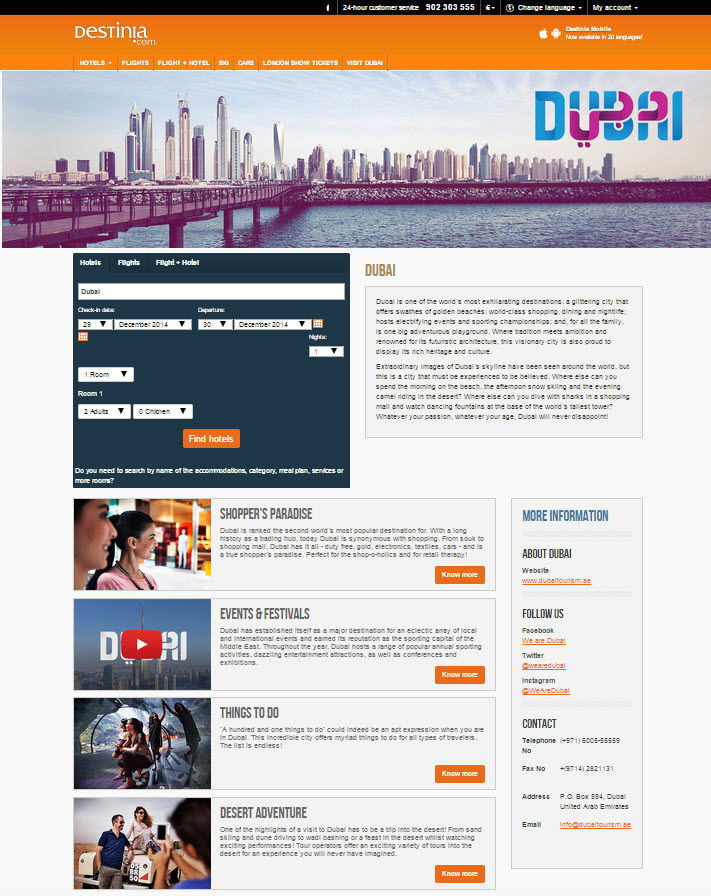 The campaign which includes a microsite and online marketing programme has been rolled-out in Europe and MENA to attract international tourists, and highlights Dubai as an all-year-round global destination. Destinia.com’s bespoke microsite was launched in six different languages: English, Spanish, French, Italian, Arabic, and German and has already seen outstandingly positive results, making Dubai on Destinia.com a 138% more popular –in terms of sales growth– as a travel destination between August and December than it was in 2013, reaching more than seven million people in more than 190 countries.

“Dubai is a fascinating city, and Destinia saw great potential in promoted the iconic city as the ultimate tourist destination,” said Inés Chueca, Partnerships Manager at Destinia. “In fact, although targeted to Europe and MENA, our microsite has received visitors from Canada, USA, and Australia.” She added. “We are proud to be contributing towards Dubai’s aim of attracting 25 million visitors by 2020 for the World Expo.” She concluded.

The online travel agency, which offers flights, hotels and a wide range of tourism products, has seen a growth of 78% travellers booking their travels to Dubai through the site, in comparison with the previous year, actively participating in building Dubai’s reputation as one of the key holiday destinations for visitors from every corner in the world.

So far successful, this agreement between Destinia and DTCM ends on 27 February, 2015. However there are conversations to prolong it for the rest of the coming year. With no competition in the region, Destinia is stepping strongly into the Middle East market. Following their success in Spain, where it ranks amongst the top five online travel agencies in this country, and a strong team based in Cairo, Destinia opened their new offices in Dubai in January and aim to be in the top three online travel agencies in the region by 2017.

Destinia offers access to VIP lounges in more than 160 airports